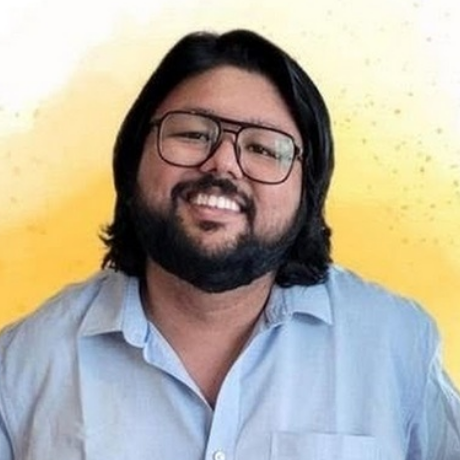 Traditionally, software and application updates were pushed out as one single chunk to the end user. In case anything went wrong with the upgrade, there wasn’t much the engineering team could do since they had little control over the application once it was released. However, with the advent of progressive delivery strategies, teams got finer control over their releases. This made it easier for them to roll back to a previous version quickly in case something went wrong.

Most of the deployment strategies, like Canary and Blue-Green allow us to quickly roll back application versions whilst maintaining different versions of our application at once. Talking about multiple versions, one of them has a feature turned on, and the other one has it turned off. But how do you know which one is better before releasing it to a larger group?

In this blog post, we’ll talk about A/B testing that will allow you to leverage data to help you decide which version is better. We’ll look at what A/B testing is, understand its role in progressive delivery, and also show how A/B testing works with Argo Rollouts using a simple example.

One of the main reasons why A/B testing is popular is because it allows teams to make changes to their product based on data rather than their opinion. The team can have a vision of a product, however, it’s the user feedback that helps shape the future of a product. Based on such feedback, the product can be improved over time. 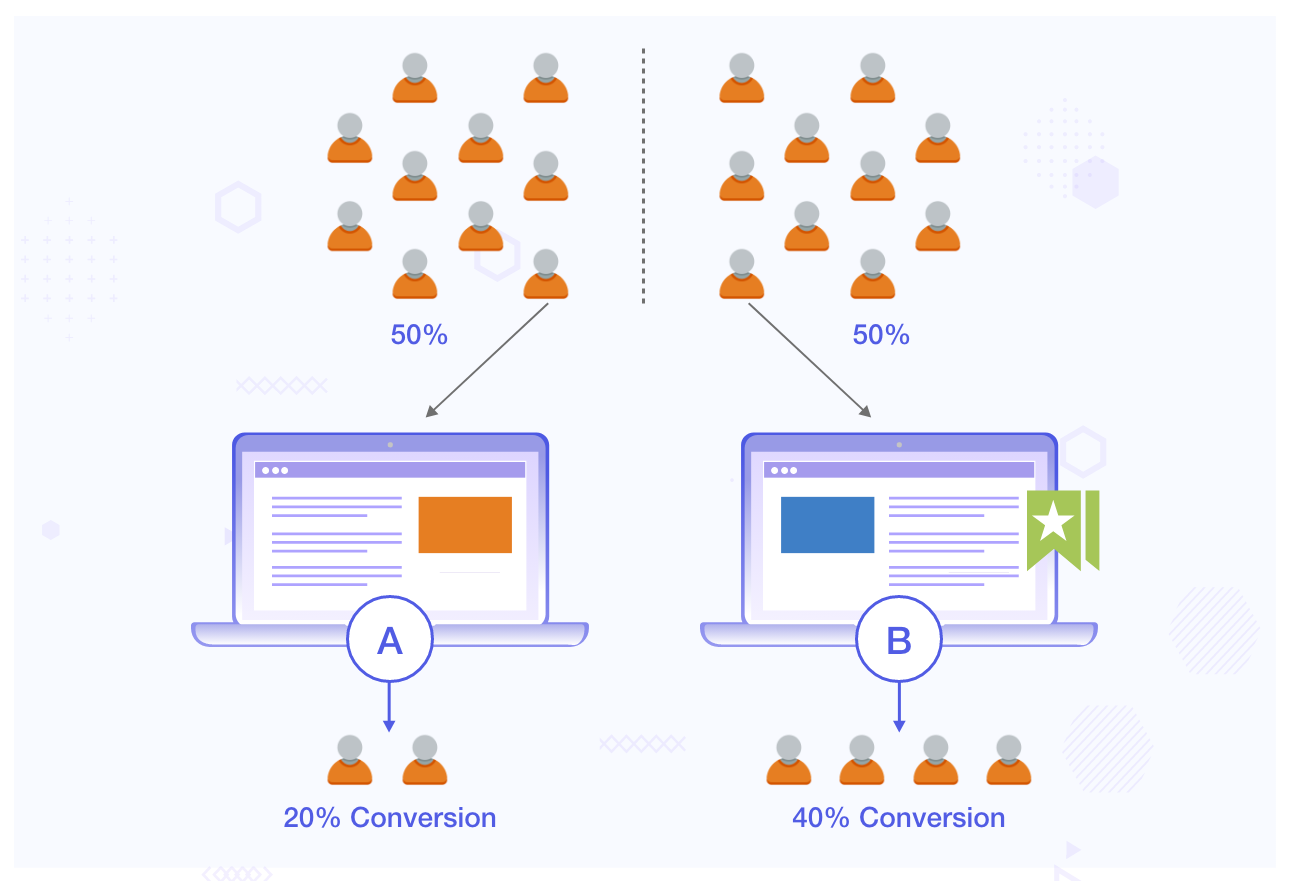 This methodology is quite popular amongst marketers to gauge the performance of a landing page and applications. Using A/B testing, they are not only able to make design decisions but also understand the user experience that affects the performance of their applications. It might be hard for many of us to believe that a simple change in the color of a button can lead to a 21% increase in conversions.

In the case of progressive delivery, you have two different deployments on which you run tests that help you decide which version is better among the two. We can launch multiple long-running experiments on various versions of our applications before deciding which one to proceed with.

The tests that you run and the metrics that you collect are entirely dependent on your use case. You can run tests on the application version themselves or use external metrics to decide on the final version. It’s common for teams to use metrics like latency, click-through rate, and bounce rates to choose the version that gets promoted to production.

Using A/B testing in progressive delivery not only makes your process more resilient and swift but also helps you decide the best experience for your users based on data.

Let us see how we can use Argo Rollouts for A/B Testing in Progressive Delivery.

Argo Rollouts is a Kubernetes controller along with a set of CRDs that provide advanced deployment strategies like Canary, Blue Green, and Experiments to name a few. It creates ReplicaSets that are similar to a deployment. The controller manages the creation, and deletion of these ReplicaSets based on a spec.template defined in the rollout object.

Argo Rollouts Experiment is a Kubernetes CRD that allows us to perform A/B testing & Kayenta-style analysis of our application. There are three components that form an Experiment. Let’s understand what these are: 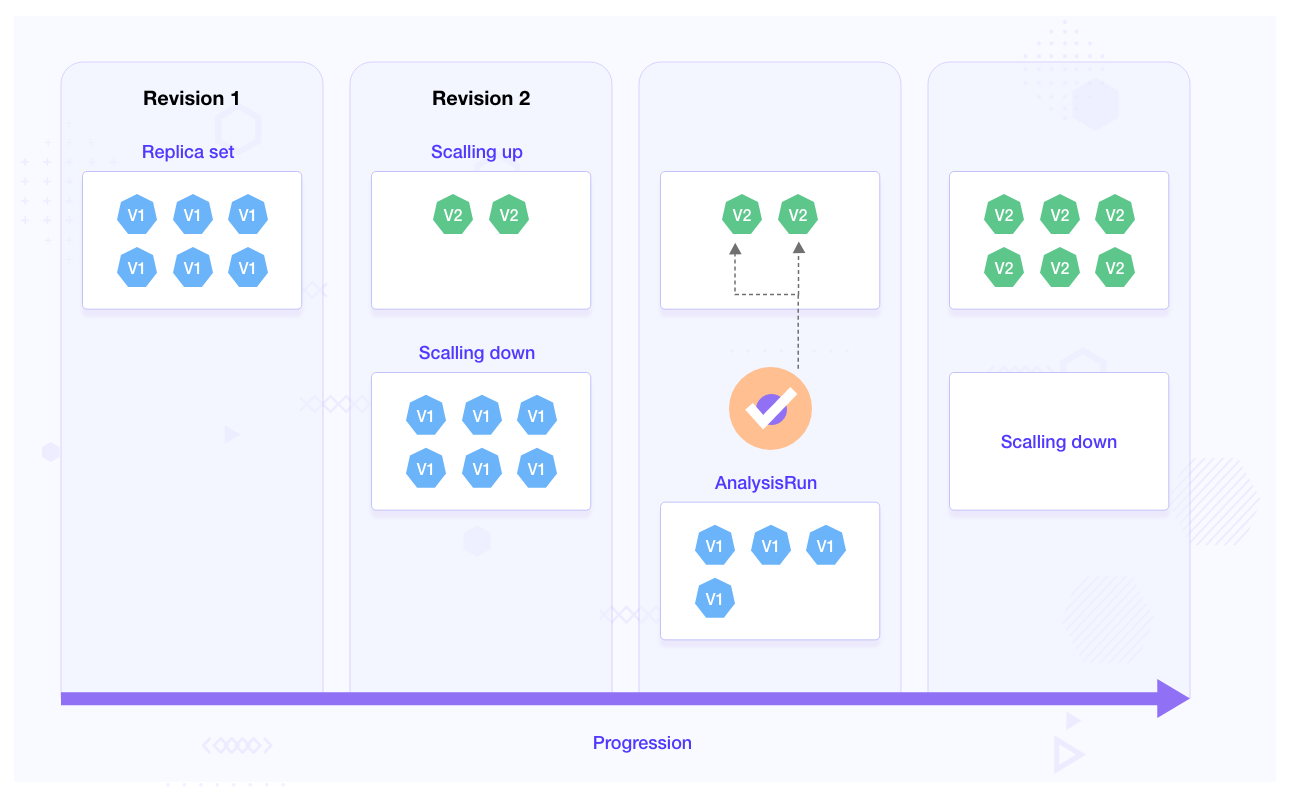 Experiments can be run standalone, as part of rollouts, or along with traffic routing. In this post, we’ll discuss how to use Argo Rollouts experiment with a canary rollout.

Below is how an Argo Rollouts Experiment works with canary rollout:

We’ll be using the familiar weather application that you might have seen in our Blue-Green Deployment using Argo Rollouts as well as Progressive Delivery using service mesh blog posts. There are two versions of the weather app that will be rolled out using a canary deployment strategy.

We will run an experiment within the canary strategy. The experiment references an AnalysisTemplate that basically gets a response from an API. Based on the response, the experiment will be marked as pass or fail. If the experiment succeeds, the newer version of the application will be rolled out, it will not otherwise.

Having understood the use case, let’s get into the code:

To begin with, you need a Kubernetes cluster. You can either have it running on your local system or on a managed cloud provider. You then connect to this cluster by configuring your terminal to access this cluster. For this example, we are using Minikube. If you are also using Minikube, make sure to enable the ingress addon.

The next step is to clone the repository that has this example:

Create a namespace to install the Argo Rollouts controller into:

Ensure that all the components and pods for argo rollouts are in the running state. You can check it by running the following command:

One of the easiest and recommended ways to interact with the Argo Rollouts controller is using the kubectl argo rollout plugin. You can install it by executing the following commands:

At this point, we have successfully configured the Argo Rollouts controller on our Kubernetes cluster.

As mentioned earlier, we’re going to use Argo Rollouts experiment along with Canary deployment. For that, we will create a canary rollout.yaml along with an AnalysisTemplate.

In the above rollout.yaml we create a canary strategy and provide an experiment as a step. The experiment is scheduled to run for 5mins irrespective of the result. It creates a canary ReplicaSet and references an AnalysisTemplate object.

The AnalysisTemplate uses a webmetric. It calls an API that returns a JSON object. The object has multiple variables and one of them is completed. Below is a sample JSON object:

The template specifies the successCondition as result.completed == true. This means that the AnalysisRun will be successful only when the value of completed is true. i.e. the rollout will progress with the update only if this AnalysisRun is successful.

Check the status of the AnalysisTemplate created using the following command:

Once the AnalysisTemplate is deployed, let’s deploy the rollout using the following command:

You can verify the successful deployment by running the following command:

At this point, our application is running with v1 of the weather app. In order to access the application, you need to do the following: 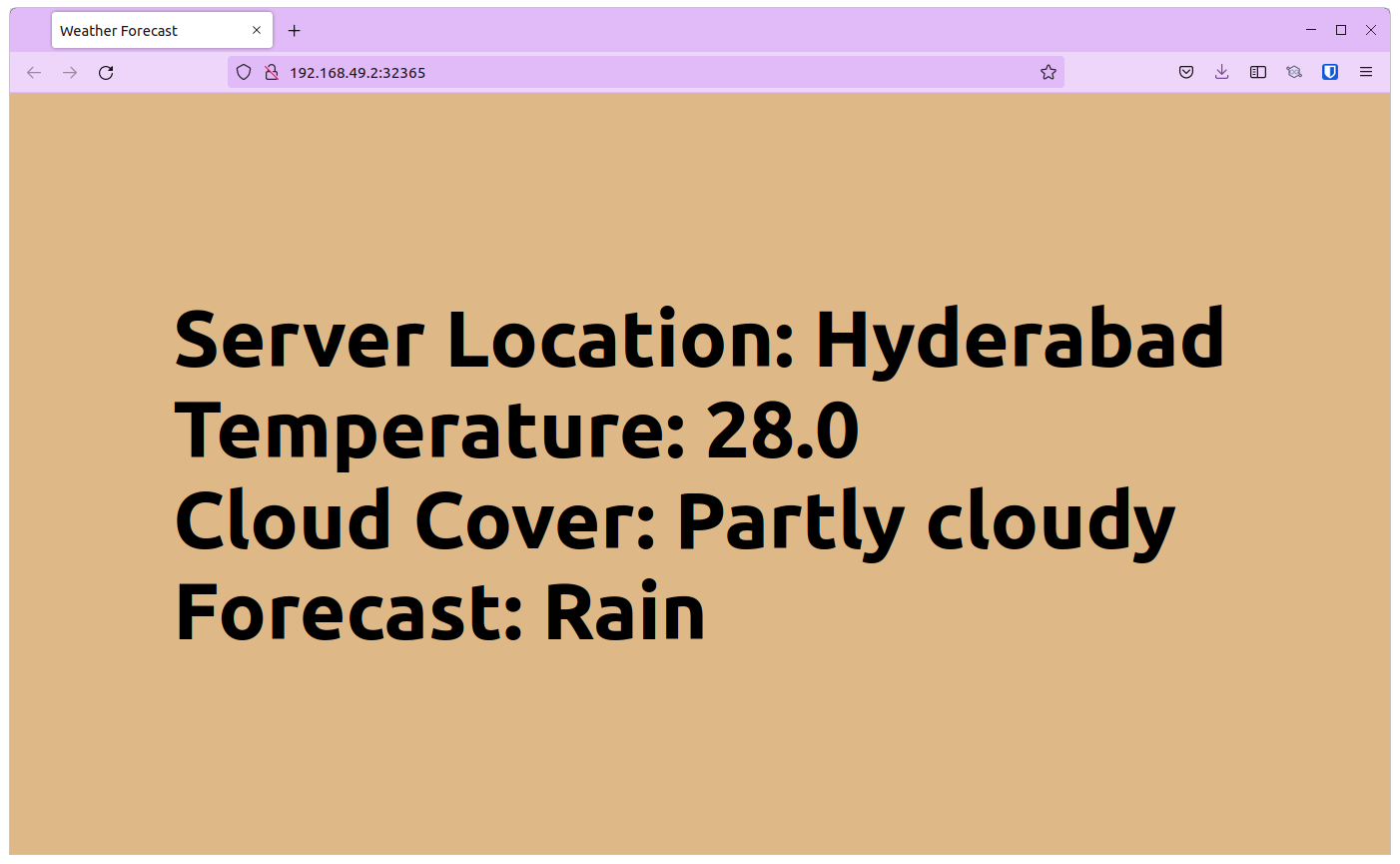 Let us now update the image with a newer one using the canary strategy.

The moment we run this command, the following activities will start simultaneously:

In the following sections, we will see each of the above-mentioned activities.

Let us now see the status of the Experiment after the AnalysisRun is successful:

Argo Rollouts comes with its own GUI as well that you can access with the below command: 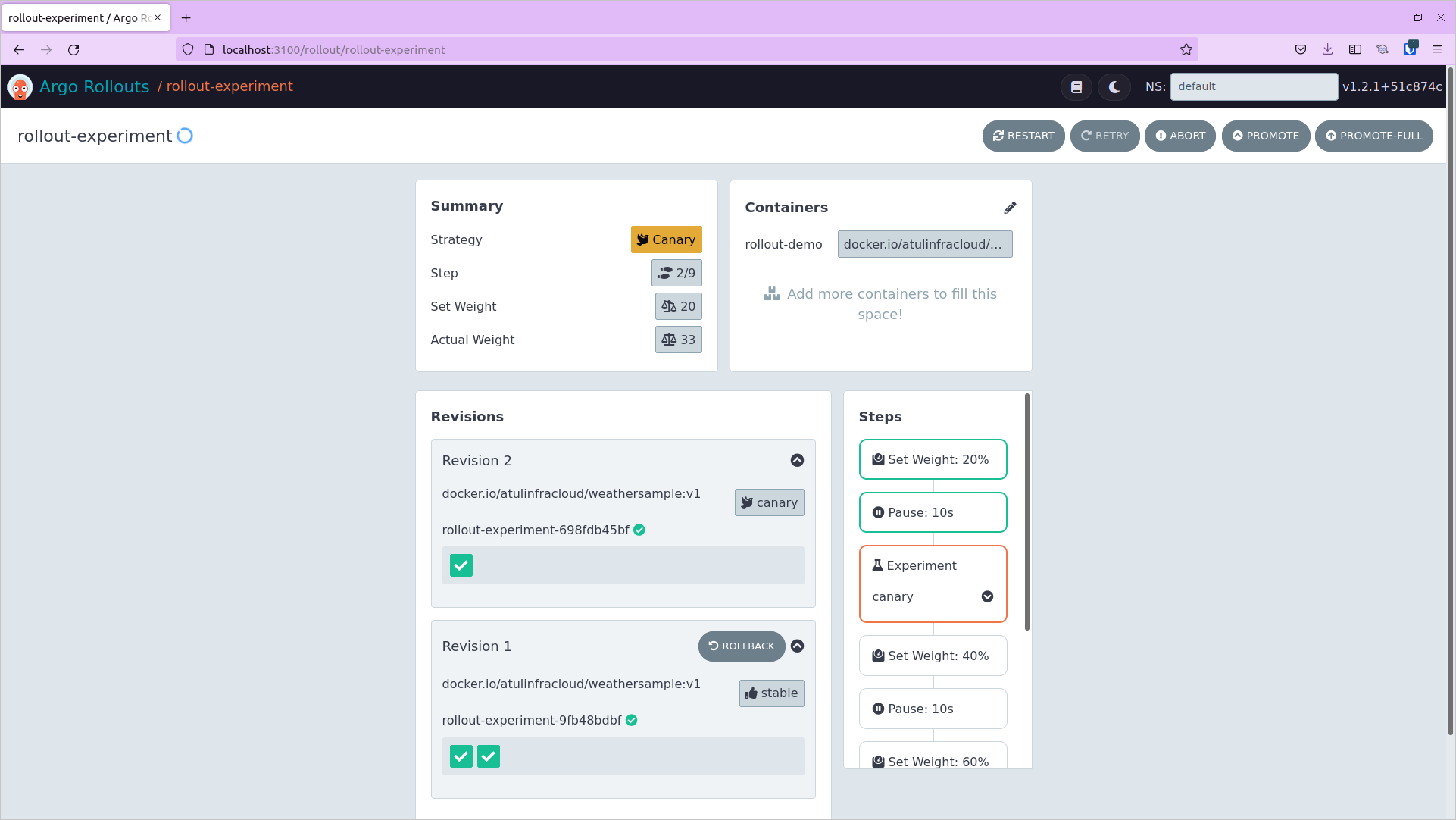 After the experiment duration has elapsed, the experiment will pass and the rollout will proceed to the next steps and eventually deploy the newer version of the application. 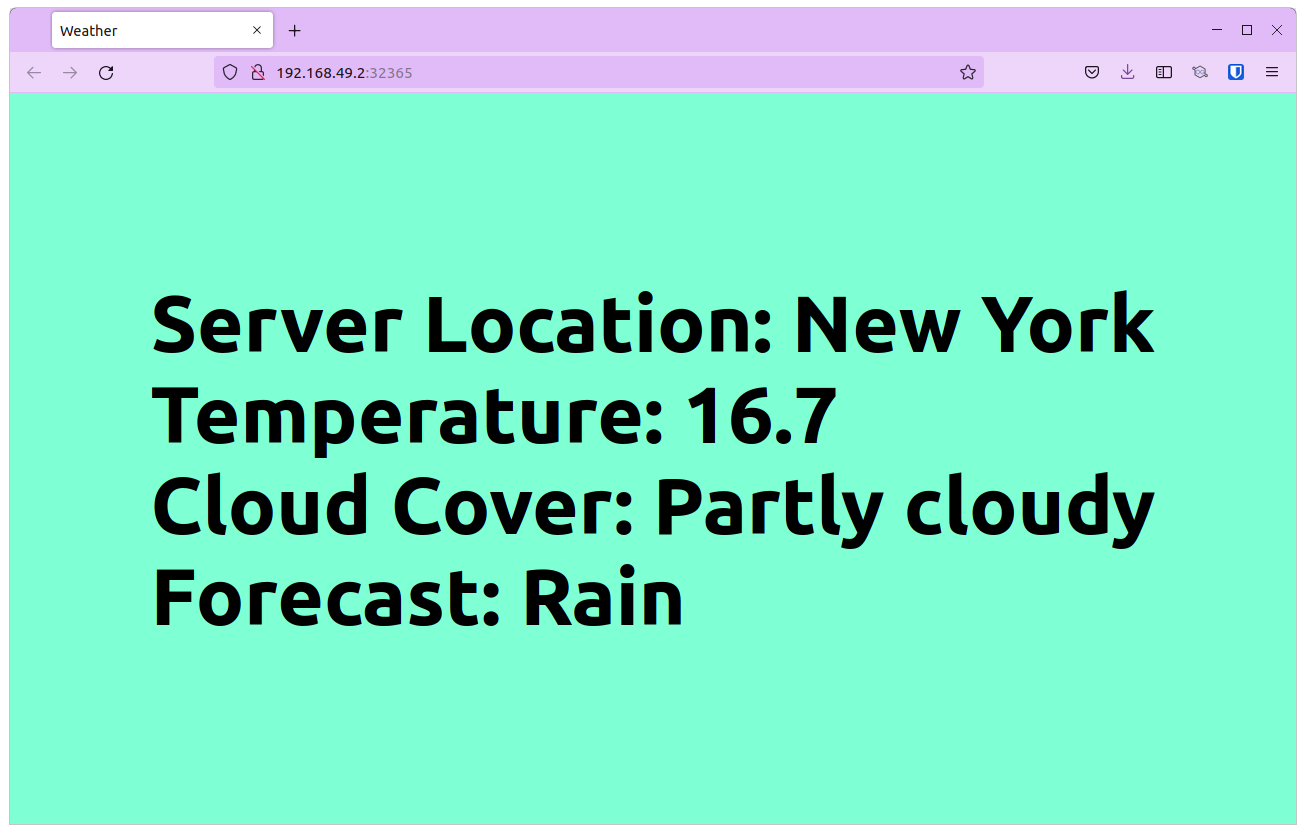 In real-life scenarios, the tests that you run can include metrics from monitoring tools like Grafana, and Prometheus, and you’ll be able to progress a rollout based on these values.

After changing the value, pass a newer image to the rollout and notice the AnalysisRun object.

That was a short demo of how you can use Argo Rollouts for A/B Testing in progressive delivery using Experiments. This was a simple example to demonstrate the capabilities of Argo Rollouts experiments for A/B testing.

A/B testing comes with a lot of benefits itself. However, by using it with canary deployments, we are able to take things a notch further. With this approach, we are able to:

Progressive delivery along with A/B Testing enables teams to perform custom A/B tests and deploy applications faster. In this blog post, we saw how you can use Argo Rollouts’ Experiment feature to perform A/B testing with canary deployment. We learned about AnalysisTemplates and AnalysisRuns and how their outputs affect the rollout.

And if you’re looking to modernize your application deployment process, consult with our progressive delivery experts. 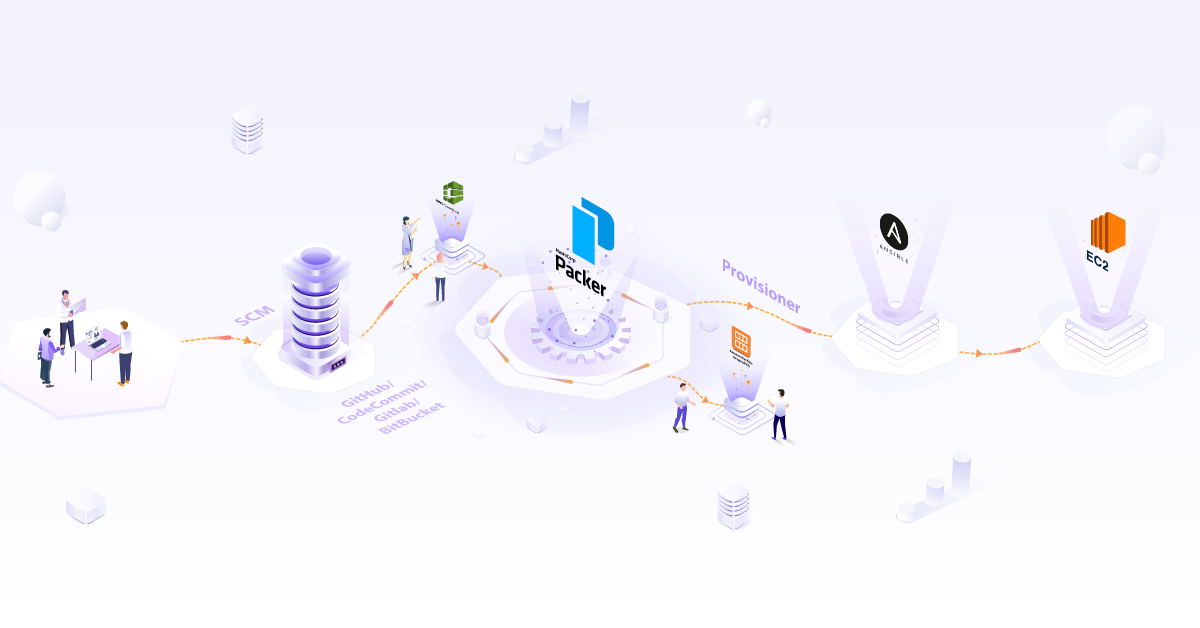