The One Where Infranauts Met - Converge 2021

If there was one thing that most of us wished for at the moment, it would be to reset and start from 2019 again. The last two years have been the most difficult ones for all of us. People were locked up in their homes, offices shut down, and everything went virtual. Even for the team at InfraCloud, things changed rapidly. All the Infranauts moved to their hometowns and our offices were shut. The sounds of those insightful discussions emitting from meeting rooms were all gone. However, as innovative as we are, we brought all of them back albeit online. From water cooler chats to newbie meets, things started happening virtually for good. Not only Infranauts were happy they were highly productive too.

Things went from real to reel and all we wanted was to interact with our peers off-screen. The last time the entire team was together was during our last team outing in 2019, and it had been long since we met. So the team had been patiently waiting for the pandemic to end to organize a meet. Little did we know that it would extend for so long. Eventually, we found a window when things were relatively normal and planned our annual meet and this time we called it Converge 2021.

Infranauts and their Converge 2021 experience

Getting some time off-screen and meeting the team in real was welcomed by one and all. We had more than a hundred Infranauts who came to Pune from various parts of India for Converge 2021. We had people flying in, chugging in or driving into Pune where the entire team spent the night before driving to Panchgani. From Engineering to Growth, People Ops to Talent Acquisition, we had everyone present. The 2 nights, 3 days event was one of the best one the teams attended in a long time. We had working sessions, innovative team bonding activities, employee talent show, rewards and recognition along with music, dance and lots of food. 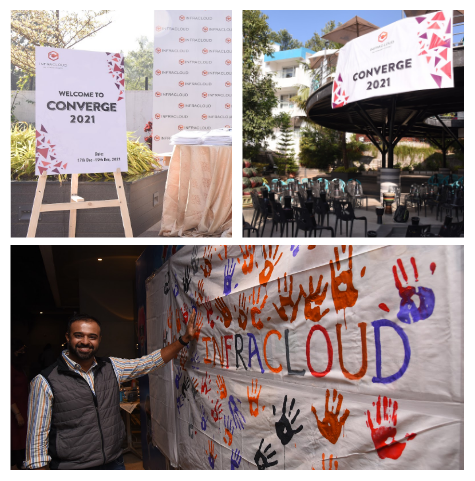 So instead of us talking about how it was, we asked our team members to share their Converge 2021 experience. Here we have Atul and Sarvanan sharing their experiences.

One of the things that most of us could relate to during the pandemic were the social media posts. At one side we had people posting about their promotions and new jobs and on the other people posting their vacation stories on Instagram. I too wanted to be one amongst them to share updates, well I had travel updates but nothing for LinkedIn. But it seems like destiny had something else in store for me. It was in the first week of December that I joined InfraCloud and the immediate next week we had our offsite - Converge 2021. Now I could share a post on LinkedIn and Instagram at the same time ;)

I packed my bags, took a flight and landed in Pune, a city where I used to visit on and off during my schooling days in Panchgani. We were put up at a hotel near the airport so even though I landed close to midnight, it didn’t take much time to reach the hotel. Early next morning we were supposed to head to Panchgani, the same town where I had spent a good part of my childhood in a boarding school. So the excitement was at its peak. I was in the hotel lobby well before we were supposed to leave. That’s when I caught up with a few folks. Thanks to them that they had updated profile photos in Slack so that I could recognize them. We headed to a nearby tapri and sipped a hot cup of chai in the relatively cool Pune morning.

The next thing I remember is getting on to the bus and driving towards Panchgani. We stopped at Vittal Kamath for breakfast. They had arranged a small buffet for us. From Pohe to Upma and Vada Sambhar we had a scrumptious breakfast. But me being me, I had to order a plate of Missal Pav to satisfy my cravings. (You don’t’ get good Missal Pav here in Hyderabad)

Around 12 we reached the resort in Panchgani. The resort was located in a quaint area away from the town. So it was only us amidst nature. We quickly got into our rooms and headed for lunch. That’s when I interacted with many other folks. We had a working session post lunch - my first one with the team. I was with my team understanding what the project was all about. I interacted with a few other folks, including Girish and Vishal, who were extremely friendly. We discussed everything under the sun - also about my role here. By the time I got the hang of things, it was tea time, and I decided to treat everyone with Pootharekulu - a famous Andhra sweet, also called paper sweet. (Well, because a way to everyone’s heart is through their stomach!) 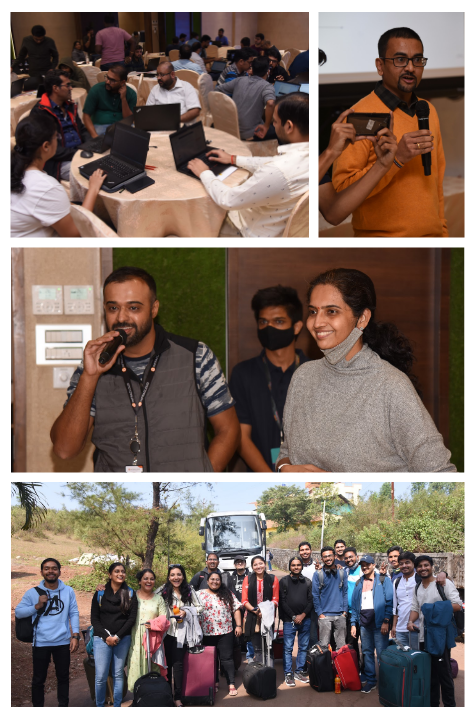 This was followed by an All Hands Meet addressed by Girish, Vishal and Priya. It was good to see that the event was not only about the numbers but about the people too. There were awards given out to the employees who had performed well in different areas along with long service awards. This was followed by an Employee Talent Night and boy I was blown away with each and every performance of the evening. From dancers to singers and musicians, every person in the organization had some talent which they weren’t scared to show off. It was then I realised that I was amongst not only some of the brightest minds but also extremely talented folks too! 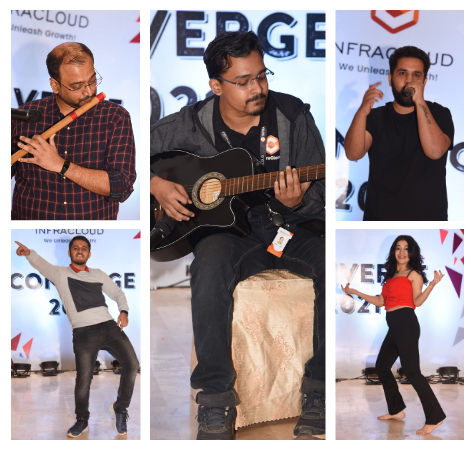 The next morning I decided to head to the town and treat myself with Pohe and Chai while soaking in the vibes of Panchgani. I was quickly back to the resort for the surprise activity. When the HR team says it’s an activity, you probably think of the same old team bonding activities. But this one was extremely new - a drum circle. It was the first time I was going to experience it. The entire office was made to sit in a circular arrangement and each one of us was given a Djembe - an African Drum. With an energetic instructor in the middle, we all had a lot of fun playing this. The thumping sounds of the Djembe echoed in the valley as the Infranauts were going all guns blazing. Each one of us were in sync with the other and that is what matters in a growing organization.

As the sun went down the chill in the air increased, it was time to let our hair down and get in the groove. We danced and danced and danced well past midnight. There was ample food, live music and a bonfire to make things even more pleasant. The band got the pulse of the audience and dished out some amazing 90s songs. The soulful music session was followed by an equally energetic session at the disco. For someone who’s not a dancer, I too shaked a leg with the rest at the disco. By this time I had bonded really well with a lot of people and it wasn’t like I was new to the organization.

I wish we all had an option for the offsite to extend further, but it was time to head home the next morning. Personally, for me, the offsite couldn’t have happened at a better time than this. Messages and mail exchanges with them will now be different. The entire team was extremely welcoming and ensured that I didn’t feel left out. Overall, it was an extremely fruitful event as I got to understand the culture of InfraCloud and the people here. It’s about a month since this concluded; however the memories are still fresh.

This offsite meeting provided a great chance to meet fellow Infranauts and leaders to share the opinions / suggestions as part of in person meetings. There were arrangements made to pick up people arriving from other cities to Pune. The event management team called me just in time, when my flight landed in Pune airport and waited at the arrival point to pick us up and drop us off at the nearby hotel. When I reached the hotel. met quite a few colleagues and it was nice to see them in person, because I’ve seen them or spoke to them only via Slack chat messages 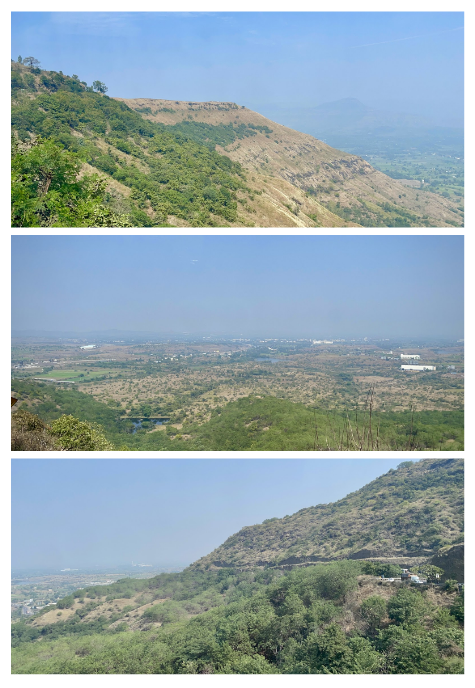 The resort is also situated on a beautiful place surrounded by the hills. 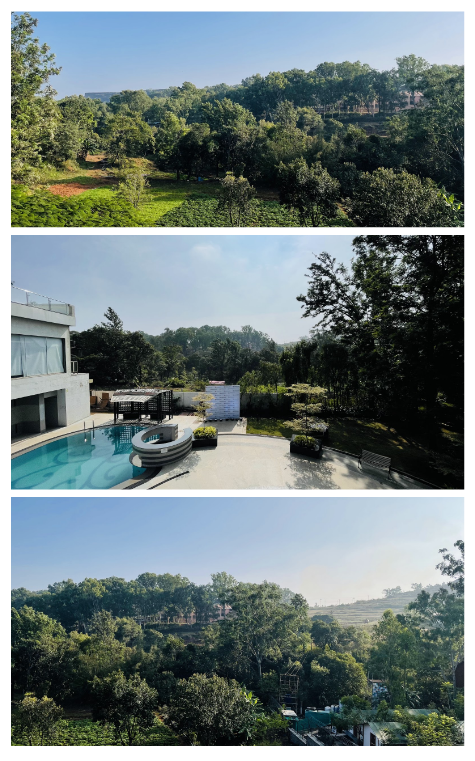 When we arrived at the hotel, we were welcomed by the event management team and allotted rooms. During the first day, we worked along with our team matesmembers sitting together and had direct 1o1 meetings. On the same day, we had our in-person All Hands Meet, award ceremony and talent show. Everyone enjoyed the events and it was great to see our fellow colleagues’ talent show.

On day 2, we were informed about having a surprise team building activity, which turned out to be a drum circle event. The show was driven by a drum composer, who helped us to perform the drum in a rhythmic synchronized manner. (photos/videos) The drumming session was a great stress buster and helped to trigger our music genius in everyone :) 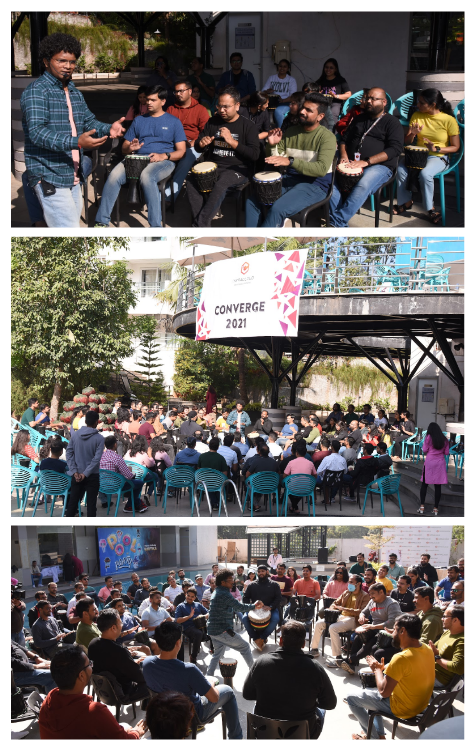 After the drum circle, we had team building activity by J Ramanand from Choose to Thinq. Theme of this event - we have been asked to role-play the “Delightful Team” and it was a great team-building session and had some memorable moments. During the evening, there was another team building session conducted by “RJ Prabhu”. The theme of the session was the importance of coordination. The balloon activity of this session had memorable moments during this activity 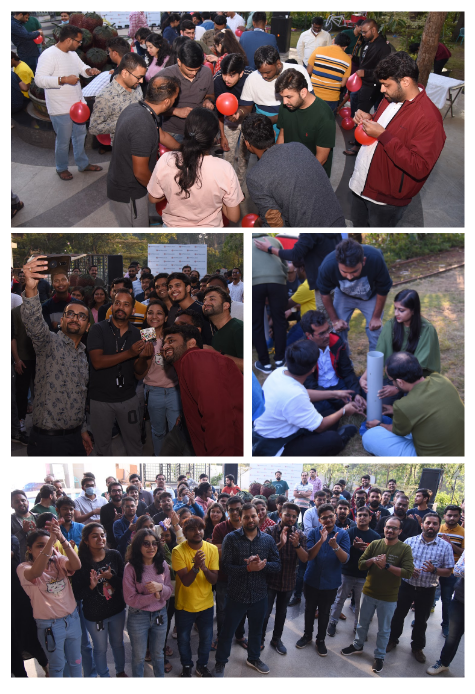 The day closed with Hand painting, Band performance, DJ night and lots of drinks :) Hospitality by event organising team was awesome and everyone is happy by the great experience during Converge 2021 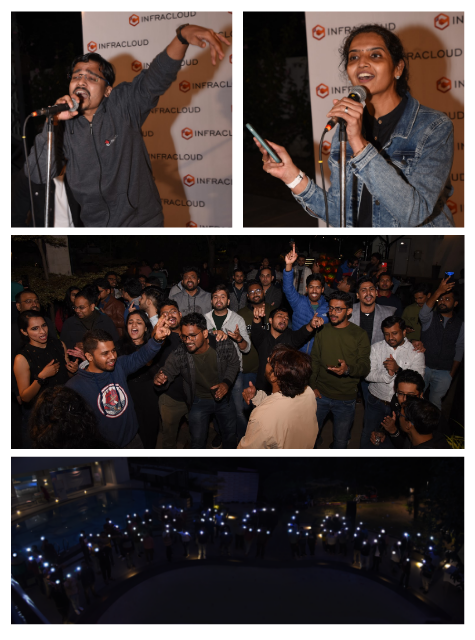 Onwards and upwards in 2022

Apart from having the event planned and executed successfully, we’re extremely happy that everyone who came joined, went home healthy. The safety of Infranauts was our topmost priority and we ensured that everything and everyone along the way were safe. Atul and Sarvanan are just two of the many Infranauts that were attending Converge 2021. We wanted to get all their thoughts in this blog post, but didn’t want to turn this post into a book!

This is just one of the many events that we conduct frequently to keep Infranauts happy and sane. You should read our culture blog posts to understand how Infranauts enjoy balance work and life:

If you also would like to experience this, why not join us? Check out the current openings on our Careers page and be a part of a growing, caring, intellectual and fun community!

Want to Work along with Brightest Minds & Solid Culture? 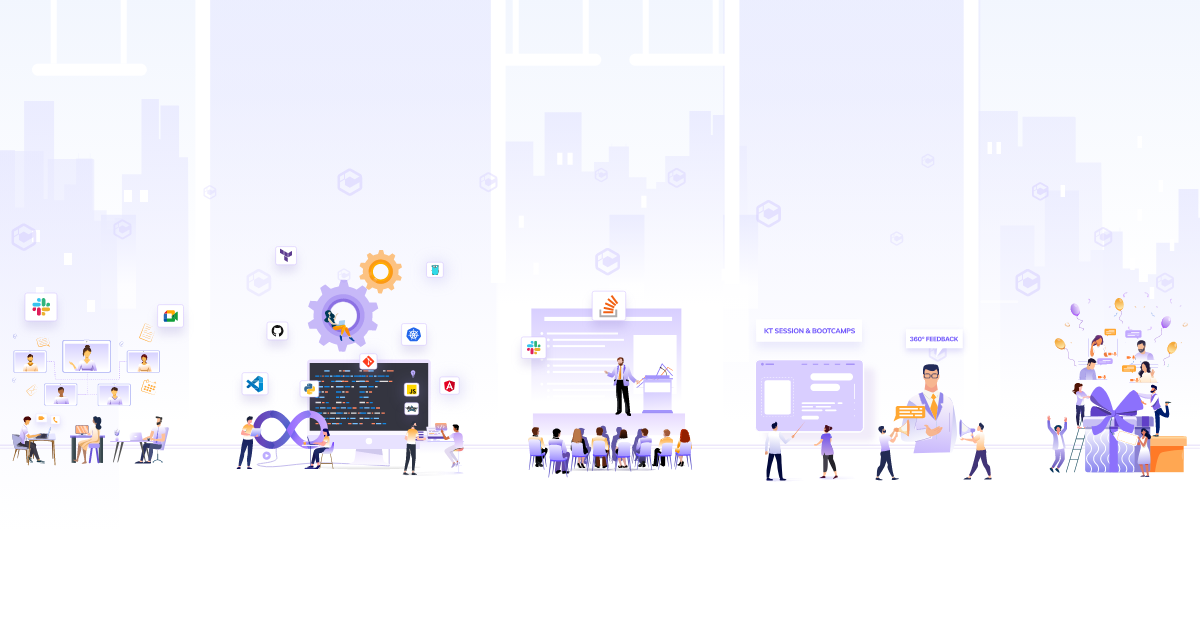 What it's like to be an Engineer at InfraCloud 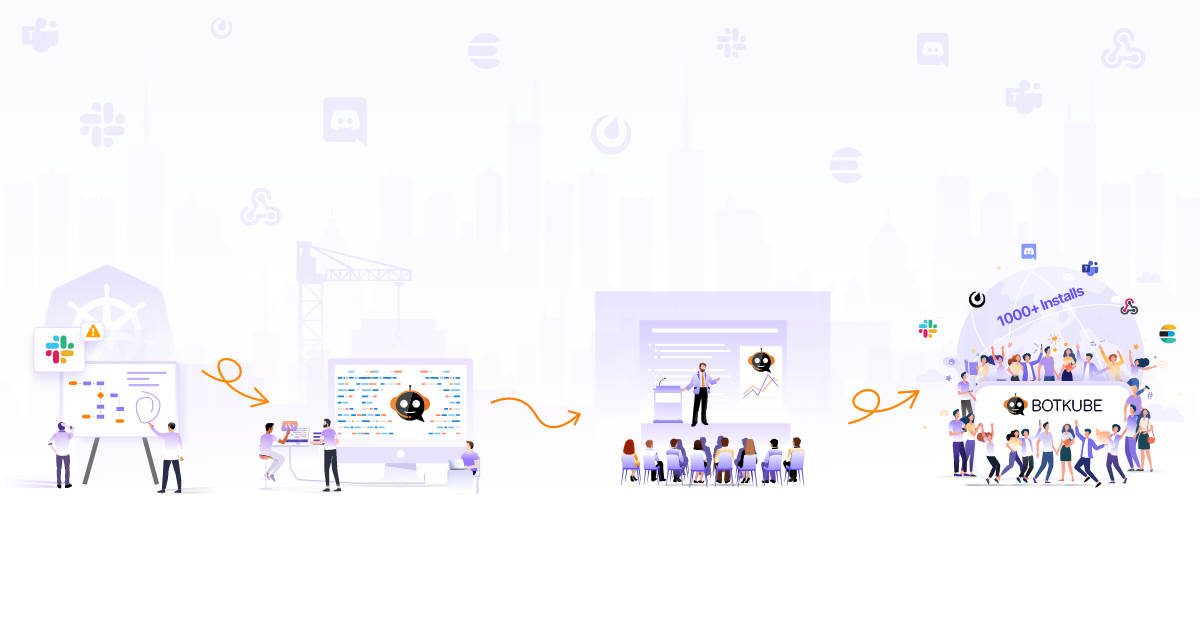 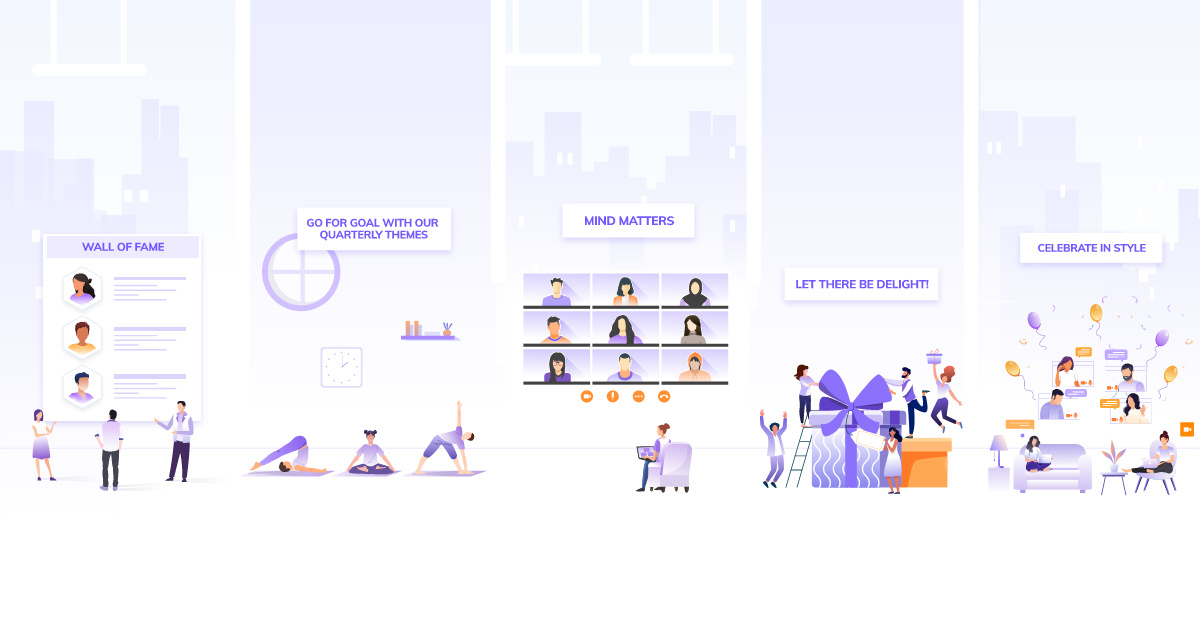 6 Things That Brought Delight to Infranauts